The last two days have been such a dichotomy of scary and welcoming feelings.  We left our hotel which we had been staying in for 10 days.  We had finally secured our home and took the vans provided by the school to our new home.  We were excited to leave the single room at the hotel and stretch our legs in a home where we all could have a bit of space we had been craving.  Upon arrival, we brought all 15 bags into the home and began sorting and placing items throughout to get some sense of “home”.  Once most things/items were in order we sat down and realized how alone we were at the moment.  We had no car to get around, no way of finding a bite to eat, no internet… We went from being in a location with options and no space to plenty of space with no options.  The kids were hungry and so were we so we sucked it up and reached out to our landlord about our vulnerability.  Within about two hours our landlord and her husband arrived with croissants, tea, apples, and milk.  They reassured us that there was no need to worry and they would take care of us.  Her husband took me to a local market to buy the essentials… bread, milk, drinks, toiletries, diapers, etc.  He translated my requests to the people working in the market when we could not find an item.  By the time we left together I had a stocked fridge!  During our journey back to our home I mentioned to him that we needed to sort out internet connection and basic utilities for the home.  He said he could help.  The next morning, around 10am he arrived and helped me to get an internet connection.  I also mentioned issues with water pressure/heating and he promised me that he could help.  He left and an hour later his wife (our landlord) called me to inform me a plumber was in route to fix any issues.  A plumber arrived and took care of everything within minutes of the call!  Even later, the landlord arrived with a new microwave for us to cook with!  I have never witnessed such a compassion to people who were as lost as us!  A compassion that does not expect reciprocation.  I will be sure to reciprocate, I assure you that. 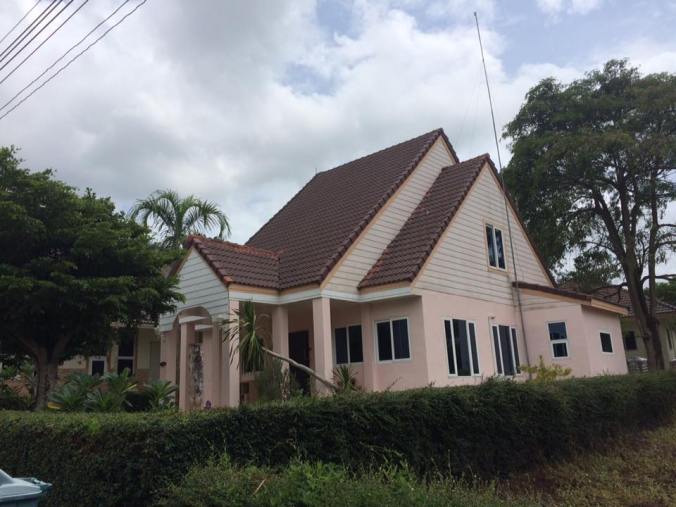 Later in the afternoon today, after my wife returned from her first day at school meeting new and experienced teachers, she brought home an expat teacher (from the UK) of two years for me to meet.  This teacher invited us into her home for drinks, to socialize with her husband and two children, and to allow our children to play.  After about 30 minutes we decided we were all hungry and she took us to a local pizza/thai food restaurant for dinner.  Over a few beers we were able to get to know each other better and get the inside scoop of being an expat in Thailand.  She heard it was my wife’s birthday so she left and returned with homemade cookies as a nice gesture.  We are used to paying with credit cards/debit cards and thought this would be an option for payment at dinner.  Unfortunately, most smaller Thai establishments only take payment in baht which we did not have enough of at the moment.  They kindly offered to cover our meals which was unnecessary but received with such appreciation.  They also offered to help us with finding a car for rent or “car for hire” as they say here as well as assistance with finding basic utilities here.  I’ve never witnessed such love, or at least not in a while.  These people are amazing and I will make it my goal to repay them in some form.  With every struggle we have encountered it has been met with an equal or surpassing act of kindness.

One thought on “Beautiful People”